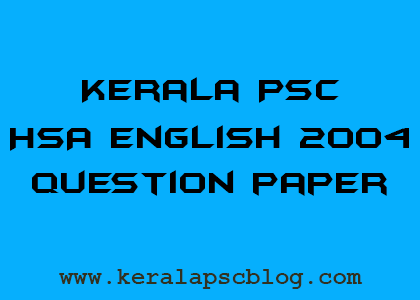 Q.1-30 Answer all the questions. Each question carries one mark.

1. The first revenge tragedy in English is ____

2.____is called the Father of English Essay.

4. The only literary epic in English literature is ____

6. Where do we read: 'The paths of glory lead but to the grave ?

7. Who first used the word 'Metaphysics' in association with Donne's poetry ?

12. The autobiographical poem written by Wordsworth is ____

14. Who said of Shelley: 'He is beautiful and ineffectual an angel beating in the void his luminous wings in vain?

16.____ is often described as chronologically Victorian and qualitatively a modern poet.

20. "As flies to wanton boys are we to gods. They kill us for their sport." Whose words are these ?

21. Who used the Heroic Couplet in English first ?

22. Wordsworth, Coleridge and Southey are known as the
____poets.

23. Sprung Rhythm is associated with the poet ____

24.____is the main source of Shakespeare's English History plays.

27. 'The Merchant of Venice' by Shakespeare is modelled upon Marlowe's ____

28. Whom does Wordsworth addressed towards the end of the poem 'Tintern Abbey'?

29. Mephistophiles is a character in ____by Marlowe.


SECTION – B
Answer all the questions Each question carries 5 marks. Maximum length of each essay should be two pages.

2. Attempt a critical analysis of Keat's 'Ode to a Nightingale'.

3. 'The poem 'Tintern Abbey' reveals Wordsworth's change from young passion for Nature to a haunting comprehension of the lovely universe'. Justify the statement.

4. Briefly examine the chief features of the epic form.

5. What are the advantages of studies as enunciated by Bacon in his essay 'Of Studies'?